Tadalafil vs Sildenafil: Which is better? 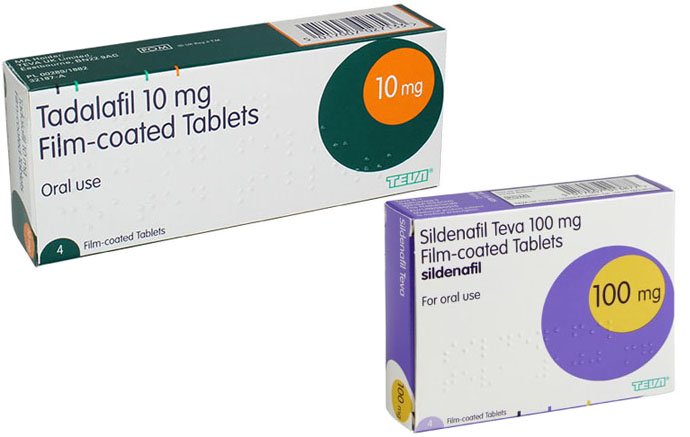 Tadalafil vs Sildenafil: Which is better?

Tadalafil and Sildenafil are two popular generic erectile dysfunction treatments. Sildenafil is the generic version of the original erectile dysfunction drug Viagra and Tadalafil is the generic version of Cialis. We compare several factors including how fast they work, cost, duration, effectiveness and more. Find out which treatment is more effective for you!

Tadalafil is the generic name of the drug Cialis. Tadalafil Daily is a low dosage tablet which is taken once a day and allows you to achieve an erection at any time of the day or night. Tadalafil 36-hour is taken 15-20 minutes before sex and works for as long as 36 hours.

Sildenafil is the generic version of Viagra, the best-known treatment for erectile dysfunction and has been licensed for use for over 15 years. Millions of men across the world have found it to be a very effective treatment. Since 2013, Viagra has been available as a generic medicine called Sildenafil. As a consequence, the price for Sildenafil has fallen substantially.

How do Tadalafil and Viagra work?

Tadalafil, like Sildenafil is what is known as a PDE-5 inhibitor. When sexually stimulated, the PDE-5 class of drugs maintains a relaxed muscle state and increases the flow of blood to the penis to facilitate an erection. PDE-5 inhibitors do not increase interest or sexual desire and are only used to treat the physical problems associated with erectile dysfunction.

Although both have a fast onset of action, Tadalafil works slightly faster than Sildenafil. While Sildenafil usually takes about 20-30 minutes, Tadalafil can work in 15-20 minutes. Tadalafil is also available as Tadalafil Daily, which is taken once a day, and will enable you to achieve an erection anytime throughout the day.

Does Tadalafil last longer than Sildenafil?

Tadalafil has a longer duration of action than Sildenafil, and can remain in the body for up to 36 hours. This has earned it the reputation of “The Weekend Pill”. This benefits you because you don’t need to pre-plan your dosage close to any expected sexual activity, but instead can utilise its effects up to 12, and sometimes 36 hours after taking it.

Is Sildenafil more effective than Tadalafil?

Does Tadalafil have fewer side effects than Sildenafil?

As both drugs work in the same way, they share many of the same side effects. These include face flushing, headaches and indigestion.  However, Sildenafil also has a few other effects that don’t seem to affect users of Tadalafil to the same extent, such as rashes, visual disturbances and diarrhoea.  Headaches also occur more commonly with Sildenafil, but may last longer with Tadalafil.  If any of these affect you after taking a dose of Sildenafil, Tadalafil may be a better option.

Conclusion: Which is Better – Tadalafil vs Sildenafil?